First of all happy heart’s day, guys. I can’t believe it’s this time of year again and I can’t believe it’s Tuesday already which means time for another TTT post. This weekly meme is hosted by Jana from That Artsy Reader Girl and if you haven’t checked her blog yet, do it now. This week’s topic kinda freestyle. Should be anything as long as it has something to do with Love. I finally settled with Ten Gestures from Books I’ve Read that Killed me. Not literally of course, but almost. These aren’t necessarily sweet gestures guys, because I do believe that in Real Romance, everything doesn’t turn pink.

Extreme spoilers ahead. Also Credits to the owners of the photos.

1. When Noah Read Allie that Notebook. (The Notebook by Nicholas Spark) 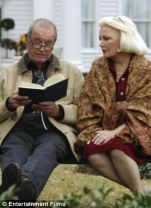 The Notebook is synonymous to Romance and out of all the sweet gestures Noah and Allie shared, of course the reading of the Notebook is what really captured my(our) heart. Noah was hoping to make her remember their story; of how they met, how she captured his heart, how he waited for her all those years, how they defy their social statuses, their reunion, their… I need to stop. And the fact that he was really doing the reading because that was Allie’s request before she forgot, was just amazing. All Noah did, he did for her. I’m dying here, guys.

Death, for Gerry, won’t stop him from caring for his wife. He knew when he died, she’ll be broken, really broken and he didn’t like that so he arranged for these letters to be sent to Holly after his death. Even if he’s already dead, he’s still showing his wife how much he loves her and…I’m crying now. Seriously. Just because I’m single doesn’t mean I can’t appreciate romance. I know pure love I see(read) one. I’m actually easily moved by romance, I just don’t want it happening to me. Why on earth am I explaining? Hahaha..

3.  He fixes her garden while stalking her. (Cocky Bastard by Vi Keeland)

Cocky Bastard is Chance Bateman. Oh look at me, I remember last name. Hahaha. Anyway, in the second half of the book, Chance did so many things to win Aubrey back because something happened between them. One of those things is stalking her, Aubrey know this though so it’s not the creepy kind. While stalking her, he thought he’s already in her house ALWAYS, so why not fix her garden since it needs fixing. It’s one of the sweetest thing you guys. Plus he babysit their goat too. Yep, A freakin’ Goat. It was so cute…

4. Lending her his comics and walkman (Eleanor and Park by Rainbow ROwell)

Was it really a walkman? I’ve read it a long time ago and really forgot but I’m sure with comics. Anyway, Eleanor and Park’s story is a cute example of first love drama. It was just so cute, started as seatmates and then the comics. Meaning it started so innocently but turned out to be one of those love stories hard to forget. 🙂

I read this one when I was in high school and so I havent read many tragic love stories yet. Reading this was almost the death of me. I was young guys, still naive and all I know about love is it’s great and conquers all, then they died. THEY DIED. I hated my teacher after reading this because she made me. How could she. And you know what she said to me after complaining?

“I thought you love Crime novels, there are too many deaths in that genre.”
And I was like, “It’s totally not the same thing. IT’S NOT” Then I walked out. Haha.

6. A Rake/Rogue’s Celibacy. (Devil In Winter by Lisa Kleypas)

If you’re a fan of Historical Romances, you’d know about Rakes , Rogues, and Scoundrels. Well, in this book, the hero was Sebastian, Lord St. Vincent is one heck of a Rake while his heroine, Evie, was a wallflower, and the most innocent, shyest wallflower there is. But long story short, they had to get married but with a valid reason, Evie, after their one and only love-making as a couple, demanded celibacy from him because of a valid reason again. Knowing Sebastian, it was amazing and so romantic that he really get along with that request. I even remember one of Evie’s friends saying that she never thought she’d ever heard the words Celibate and Sebastian in one sentence. I was like,

7. That back-to-back time travelling. (A Knight in Shining Armor)

I know, I know, there’s Outlander out there. Sorry but I already decided not to read that series. Anyway, this book surprised me with two Time travellings having both of them travelled to each other’s timeline. Actually it was like two stories in one. First was when Nicholas travelled to the future because he was called by Dougless’ pleas and second was when it was her turn to follow Nicholas in his time because their story isn’t just finish yet. And boy, was it so amazing, that in order for their story to have a happy ENDING, she travelled BACK and not forward. Wooow.  Oh I’m rereading this one. Like right now.

8. Him Trying Though He Knew He Can’t (Crooked Kingdom by Leigh Bardugo)

Ahhh Inej and Kaz… In Chapter 26, there was this scene in the bathroom where Inej needed to change her bandages and Kaz was with her but you see Kaz has a traumatic experience about flesh. So it was hard but then he suddenly said, ‘I can help you’, to Inej and they were both surprised and the scene unfolds into one of the most heartbreaking scene I’ve ever read. It was romantic in a very painful way, especially to the readers.

09. I don’t know how to say this particular gesture. (Ugly Love by Colleen Hoover)

This author never hesitates to tackle real stuffs no matter how twisted, or painful they are. And with ugly love, the gesture I’m referring to was screaming romance, yes, but it also showed how sometimes love makes a person stupid. And though I don’t wanna promote stupidity due to love, this one deserves to be in this list because hey, IT killed me. At last quarter of the book, there was this supposedly love scene where the guy called the girl by another name and I DIED. Then he apologizes of course, and wanted to stop the love-making but she just said, JUST FINISH because she understands why he was like that. And I DIED AGAIN. I wanted to be mad at the hero but I couldn’t because I understood too, guys. Now you must understand why I couldn’t name this gesture.

Every confession I read and you’ve read made it to this list. No matter how meager or grandest they were made, they should still be the most romantic gesture there is. CONFESSION. Because we all know not everyone got to do this seemingly simple task. 🙂

Well, there you have it guys. The ten romantic gesture from books that really killed me. 🙂 🙂 🙂 I’m curious about what gestures that affected you or killed you. And have you read these books and did those gestures affected you as much as they did to me?

I think Page is partially not a cat. She's showing some signs. 😹😹😹
Page is wondering why I'm so busy on my desk. 😻😻😻
2020 sucks but I wanna know what's keeping you all busy these days? Tell me about your current projects, current reads, hobbies, etc.
Tell me your pet's name. This cutie here is PAGE and she's only 5-week old. I'm a new cat mommy and I would appreciate any advice. 😻😻😻
Loading Comments...
%d bloggers like this: